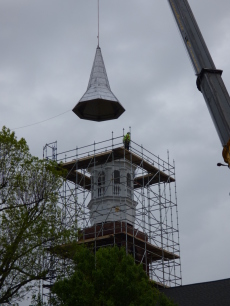 The New Holland Band has performed at many significant community events throughout its history. The band is ready and eager to design a custom performance to provide just the right music to make any civic event a memorable one.

The photo above shows the new steeple being lifted to the top of the historic St. Stephen Reformed Church, originally constructed in 1799. In addition to providing a musical prelude, the band performed throughout the ceremony including accompanying a vocal solo and playing several hymns with congregational singing. The dramatic first lighting of the new steeple was accompanied by the band performing Scott Watson's original composition "A Golden Legacy".

The video below features the band near the conclusion of "A Golden Legacy" as the lighting took place.

During the annual Memorial Day Pilgrimage to 13 cemeteries across Eastern Lancaster County, The New Holland Band and members of the New Holland United Veteran's Council leads hundreds in somber and grateful rememberance of those who have served our country. 2022 marked the 100th year of New Holland's annual commemoration.

Here is an example of a portion of one of the ceremonies at the Evangelical United Methodist Church cemetery during the 2019 pilgrimage. To learn more about the pilgrimage itself, you can watch The Pilgrimage video series that was developed as part of New Holland's 100th Annual Memorial Day Pilgrimage.